Ultrasound testing is a non-destructive test method that can be used for detecting defects and irregularities in the material. This method uses acoustic waves with a frequency above the human audible range (> 16 kHz). These are called ultrasonic waves. There are various way of creating these ultrasonic waves.

Ultrasonic waves are most commonly created by using the piezoelectric effect. The properties of some materials are used so that they change their geometric dimensions when creating electric current.

The so-called piezo element is the core of an ultrasonic head. During ultrasound testing, the ultrasound created in the test head has to be transferred to the test material. As air is unsuitable for this purpose, a coupling agent such as water, oil, or gel, as used in the medical sector, is used.

Another method for creating ultrasonic waves is the EMAT method, where ultrasound is created electro-dynamically directly in the test material, which means no coupling agent is required. The EMAT method is described in more detail at the bottom of this page.

The impulse-echo method is particularly important for ultrasound testing. A short ultrasonic impulse is created and coupled into the test material, after which the test system waits for the echo if this impulse. The echo can be received with the same piezo element which has been used for creating the ultrasonic impulse. So-called SE test heads, which contain two piezo elements – receiver and sender – in one housing, can also be used.

The position of the back wall echo can be used for determining the wall thickness of the tube or the thickness of the plate. Any defects contained in the material, such as lamination, enclosures, or precipitation, can result in an additional reflection of the ultrasound. The A-image then shows an additional echo which can be used for detecting the defects. 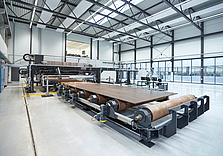