For a long time people have been fascinated with the dream of flying, to see the world from a different perspective. Since the first attempts at flight, a highly technological and innovative industry has developed that not only brings us safely to our vacation spots but also reliably navigates us through the urban jungle via satellite technology, for example.

Safety and reliability also characterize the products from FOERSTER. For this reason, our precise and highly sensitive measuring and test devices, including the SIGMATEST and MAGNETOSCOP are used for the regular maintenance of airplanes. In addition, our 3-AXIS MAGNETOMETER can be used as a reference for calibrating magnetic compasses in aircraft for example.

Highly sensitive measuring probes from FOERSTER can also be found in space. In 1962, the first FOERSTER magnetometer was installed in the satellite Mariner II which was used to investigate the magnetic field of Venus. Following this, FOERSTER measuring equipment was used in numerous other space projects including the precise alignment of the ROSAT ROentgen SATellite (X-ray observatory). Prof. Friedrich Förster received the highest distinction of NASA in 1992 for his achievements.

Regular maintenance must be carried out on airplanes to ensure that strict safety measures are observed. In addition to servicing, this also includes the inspection and repair of individual components. During flight, the material is subject to enormous pressure. As an aid to maintenance, FOERSTER has developed devices to reliably check locally that individual parts remain free from cracks and potential damage.

One example are turbine blades, of which more than 1000 are installed in a single engine. During flight, corrosion damage and cracks can occur on these blades, which are arranged in a wheel shape. 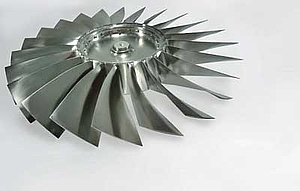 We help you to continue to enjoy freedom over the clouds without any care.